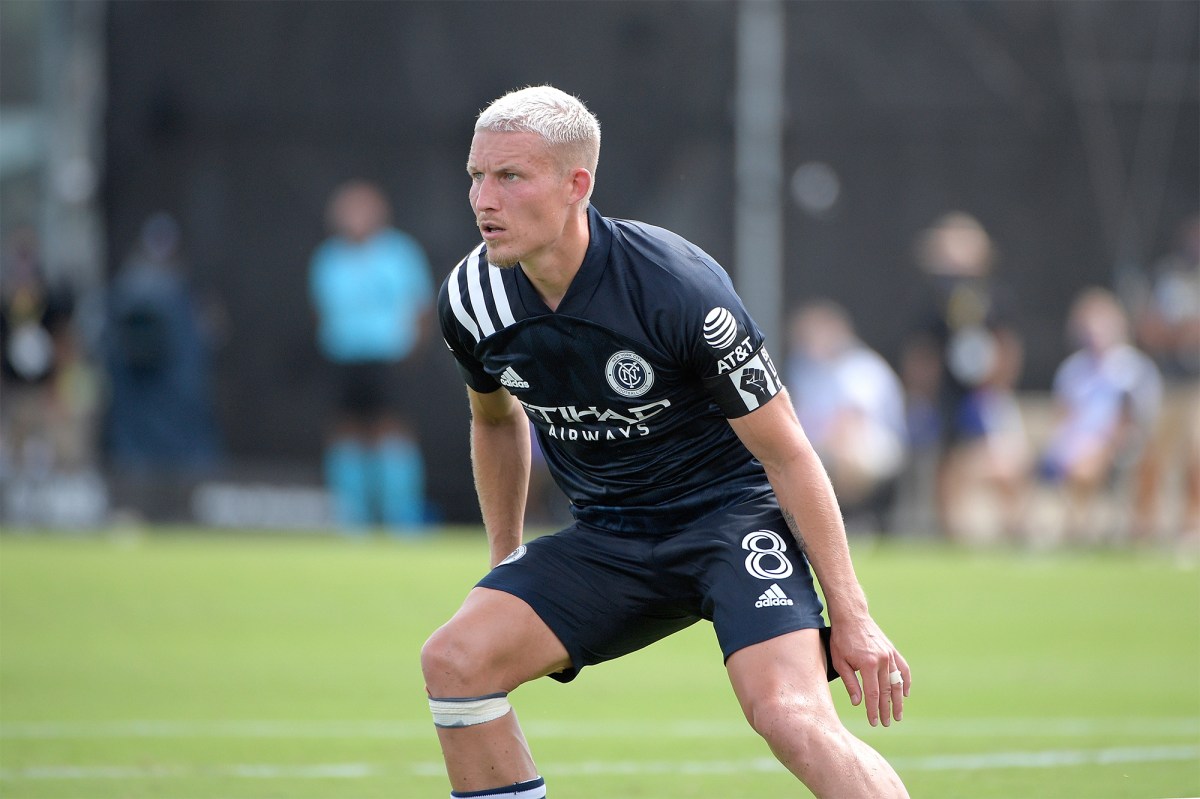 What is Alex Ring’s best position?

It depends who you ask.

His old coaches Patrick Vieira and Domenec Torrent often saw him as a holding midfielder — or a “No. 6” — and Ring was named to the 2018 All-Star team largely on the back of playing that role.

From the 2017-18 season (Ring’s first with NYCFC, which plays Toronto on Wednesday night) through 2018-19, Ring was used in a defensive midfield spot 22 times in all competitions, second only to his 36 appearances as a more advanced “No. 8” in that time, per Transfermarkt. Roughly splitting his time between the two roles, Ring grew accustomed to playing deeper and even told The Post it was his best position.

“The biggest thing was when Pat put me as a lone No. 6,” Ring said in 2018. “That’s my best position. I think that’s when you know you take your game to another level when you play a position where you know your strengths and you don’t do more than you have to. It’s like everything comes natural. I’ve played as a No. 6, 8, 10 in my career and people say, ‘It’s central and it’s in the midfield’ but there’s fundamental differences between all those positions.”

While Ring wasn’t quite a full-time No. 6, it was at least accepted by both Vieira and Torrent that he was a central player. If he wasn’t playing in the midfield, he was most likely to be used as a center back (seven times in his first two seasons).

This season, Ring has played more times on the left wing or as a center attacking midfielder (No. 10) (four total, two apiece) than he has as a No. 6 (three), and Deila hinted on Tuesday that he views Ring’s position as fluid moving forward.

“He can play different roles but I like him more in a position higher up in the pitch… He can be where I want him, and he will do a good job wherever position I put him in,” Deila said. “So to say one position I think is hard, but he suits a lot that left side as well, because he’s, as I said, box to box, really good defensively, winning balls, scoring goals, coming into situations in between the lines and also in the box. So it’s about finding the balance in the team, so we are not too offensive and not too defensive, it’s like finding that balance between attacking and defending.”

The issue is less with Deila’s use of Ring so far than his vision for him. Maxi Moralez and Alexandru Mitrita have both struggled with injuries this year. Rotation happens throughout a long season, and sometimes people need to fill in the gaps.

But Deila had a chance Tuesday to define Ring’s position — or at least bring some clarity to it. What he did instead was admit he will continue using him in a variety of roles, many of which don’t particularly suit him.

Deila has his reasons for playing Ring on the left — his disenchantment with Mitrita’s work rate namely — and has grown to like the defensive midfield pairing of Keaton Parks and Sands, who primarily played center back last season. That has left Ring most often playing as a No. 8 this season (10 times), a less unfamiliar role but one he still doesn’t view as his best.

And so Ring has been thrust into the unenvious pickle of being a captain without a fixed position, a player too good and too respected to leave out of the lineup but one who is forced to make sacrifices for the team within it. That Deila is still figuring out how best to use the team’s captain is as big a problem as the minutiae of Ring’s lacking attacking output.

On that end, however, Ring has unsurprisingly underwhelmed going forward. Though he’s scored three goals this season and his work rate will keep him in Deila’s good graces, he’s just ninth on the team in shot-creating actions per 90, per FBref (excluding Joe Scally and Gedion Zelalem who have both played less than 90 minutes), and is seventh in expected assists, behind players like Mitrita and Jesus Medina with far fewer minutes. And fans have taken notice.

Of course, Ring’s attacking numbers are impacted by his time not spent on the wing or at the No. 10, but that’s precisely the point. Deila shouldn’t expect a natural holding midfielder to produce like he’s not one, especially when his position changes are so sporadic.

Sands’ and Parks’ emergence has undoubtedly created a conundrum for Deila, but constantly switching around Ring and making him a victim of his versatility isn’t good for anyone. Put him in a midfield three, restore him to being one of two No. 6s, or even him use him off the bench if it’s not the right game for him.

But don’t expect Ring to be something he’s not.

New promise for the Red Bulls

The Red Bulls’ new designated player Dru Yearwood is impressing early on, with his latest start against Cincinnati a nice glimpse into his game. In that match, Yearwood was second on the team in successful dribbles (2), joint-second in shot-creating actions (2), and joint-second in pressures (16). He’s a good bet to start again on Wednesday against Inter Miami.

Yearwood was purchased by New York from Brentford, a club in England’s second tier with a fantastic scouting record and a keen eye for talent. If Yearwood’s performance against Cincinnati can be repeated, he’ll be a good fit for the Red Bulls: a midfielder capable of creating, but also equipped with the graft so important to New York’s identity.

Keep an eye on this 20 year-old Briton.