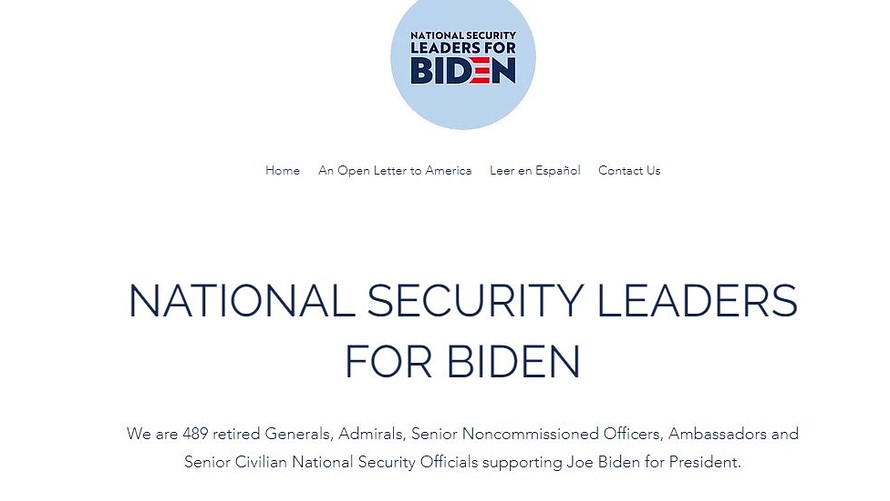 With the presidential election just 40 days away, it’s hardly surprising to see a number of prominent Americans putting chips on the table and voicing a preference for four more years of Donald Trump or a return to the White House of a former two-term vice president, Democrat Joe Biden.

Noteworthy Republicans bolting the Trump camp, naturally, have made headlines, as have endorsements of Biden by former high-ranking officials under Trump, including, of late, Miles Taylor, who served as chief of staff in the Homeland Security Department, and Olivia Troye, Vice President Mike Pence’s homeland-security adviser. Sen. John McCain’s widow, Cindy, endorsed Biden this week, and Rick Snyder, the former Republican governor of Michigan, not only said he’d vote for Biden but called Trump a bully and a divider of the American people.

Don’t miss:Trump refuses to commit to peaceful transition of power

Carly Fiorina, the former Hewlett-Packard HPQ,   HPE,  CEO and a member of the large Republican presidential field that in 2016 produced as party nominee Trump, took Biden’s side this summer.

Colin Powell, the Republican former chairman of the Joint Chiefs and secretary of state, spoke at the Democratic nominating convention, as did former Ohio Gov. John Kasich.

That drip-drip-drip turned into a fire hose on Wednesday with a bipartisan open letter signed by nearly 500 national-security leaders including such noteworthy names as those of former defense secretaries, from both parties; two former national-security advisers; a number of past secretaries of the military service branches; and various members of the intelligence-agency brass.

Here is that letter in its entirety, unedited:

AN OPEN LETTER TO AMERICA

To Our Fellow Citizens:

​We are former public servants who have devoted our careers, and in many cases risked our lives, for the United States. We are generals, admirals, senior noncommissioned officers, ambassadors, and senior civilian national security leaders. We are Republicans, Democrats, and Independents. We love our country. Unfortunately, we also fear for it. The COVID-19 pandemic has proven America needs principled, wise, and responsible leadership. America needs a President who understands, as President Harry S. Truman said, that “the buck stops here.”

We the undersigned endorse Joe Biden to be the next President of the United States. He is the leader our nation needs.

We believe that Joe Biden is, above all, a good man with a strong sense of right and wrong. He is guided by the principles that have long made America great: democracy is a hard-won right we must defend and support at home and abroad; America’s power and influence stem as much from her moral authority as it does from her economic and military power; America’s free press is invaluable, not an enemy of the people; those who sacrifice or give their lives in service of our nation deserve our respect and eternal gratitude; and America’s citizens benefit most when the United States engages with the world. Joe Biden will always put the nation’s needs before his own.

Those who have served know empathy is a vital leadership quality – you cannot do what is best for those you lead if you do not know their challenges. Joe Biden has empathy born of his humble roots, family tragedies and personal loss. When Americans are struggling, Joe Biden understands their pain and takes it upon himself to help.

​We believe America’s president must be honest, and we find Joe Biden’s honesty and integrity indisputable. He believes a nation’s word is her bond. He believes we must stand by the allies who have stood by us. He remembers how America’s NATO allies rushed to her side after 9/11; how the Kurds fought by our side to defeat ISIS; and how Japan and South Korea have been steadfast partners in countering North Korean and Chinese provocations. Joe Biden would never sell out our allies to placate despots or because he dislikes an allied leader.

​While some of us may have different opinions on particular policy matters, we trust Joe Biden’s positions are rooted in sound judgment, thorough understanding, and fundamental values.

We know Joe Biden has the experience and wisdom necessary to navigate America through a painful time. He has grappled with America’s most difficult foreign policy challenges for decades, learning what works – and what does not – in a dangerous world. He is knowledgeable, but he also knows that listening to diverse and dissenting views is essential, particularly when making tough decisions concerning our national security. Many of us have briefed Joe Biden on matters of national security, and we know he demands a thorough understanding of any issue before making a decision – as any American president should.

Finally, Joe Biden believes in personal responsibility. Over his long career, he has learned hard lessons and grown as a leader who can take positive action to unite and heal our country. It is unthinkable that he would ever utter the phrase “I don’t take responsibility at all.”

​The next president will inherit a nation – and a world – in turmoil. The current President has demonstrated he is not equal to the enormous responsibilities of his office; he cannot rise to meet challenges large or small. Thanks to his disdainful attitude and his failures, our allies no longer trust or respect us, and our enemies no longer fear us. Climate change continues unabated, as does North Korea’s nuclear program. The president has ceded influence to a Russian adversary who puts bounties on the heads of American military personnel, and his trade war against China has only harmed America’s farmers and manufacturers. The next president will have to address those challenges while struggling with an economy in a deep recession and a pandemic that has already claimed more than 200,000 of our fellow citizens. America, with 4% of the world’s population suffers with 25% of the world’s COVID-19 cases. Only FDR and Abraham Lincoln came into office facing more monumental crises than the next president.

Joe Biden has the character, principles, wisdom, and leadership necessary to address a world on fire. That is why Joe Biden must be the next President of the United States; why we vigorously support his election; and why we urge our fellow citizens to do the same.

Wendy R. Anderson, former Chief of Staff to the Deputy Secretary of Defense

Charles A. Blanchard, former General Counsel of the Air Force

Antonia Chayes, former Under Secretary of the Air Force

Michael B. Donley, former Secretary of the Air Force

Daniel B. Ginsberg, former Assistant Secretary of the Air Force

Mary B. Hannagan, former Director of Staffing, Office of the Director of National Intelligence

Alex Wagner, former Chief of Staff to the Secretary of the Army

Peter D. Lennon, former Special Assistant, Office of the Under Secretary of Defense

Letitia A. “Tish” Long, former Director of the NGA

Thomas P. Oppel, former Chief of Staff to the Secretary of the Navy

Joe Reeder, former Under Secretary of the Army

Walter B. Slocombe, former Under Secretary of Defense

Ambassador Joseph Westphal, former Under Secretary of the Army

Patricia J. Zarodkiewicz, former Senior Executive to the Secretary of the Air Force