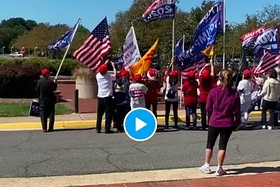 A day after the cable news channels carried images of Election Day–length lines at some polling places in suburban Virginia, and elsewhere, on the opening day of the early voting period, a Washington, D.C., photographer and filmmaker posted footage of demonstrators apparently seeking to block access to a voting site in Fairfax, Va., some of them waving Trump flags, Trump-Pence signs and other paraphernalia, with masks said to be a rarity, reportedly causing contagion concern among some turning up at the polling place to vote:

At the site on Saturday, chants of “Four more years” appeared at least occasionally to be met by a competing “No more years,” while online observers expressed outrage and disappointment:

The state Republican Party appeared to remark derisively of those complaining that not only might the pro-Trump demonstration and signage be a violation of electioneering rules but that the group may have intended to limit access or deter voters, suggesting on Twitter that a “waaaambulance” should be called:

Observers, including the chairman of the county Democratic Party organization, ultimately reported that those queueing for the chance to cast their ballots were moved inside — potentially elevating coronavirus contagion risk — and that the demonstrators dispersed when a security detail appeared on the scene.