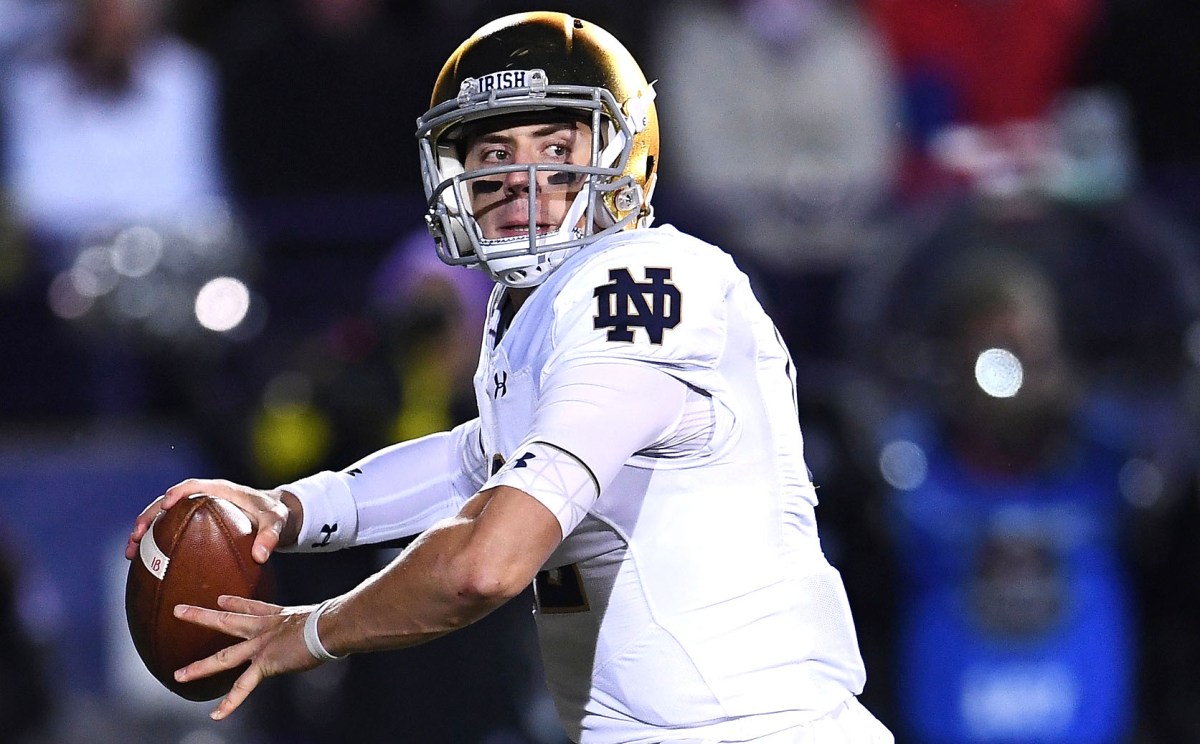 Coach Brian Kelly’s Fighting Irish (2-0) led 35-0 at halftime and for the second year in a row posted a 52-point shutout for defensive coordinator Clark Lea.

“We talked all week about the standard we had set for our football team, and it’s really just a mindset for our offense,” Kelly said. “It was a point of emphasis and we got off to that fast start and obviously that set the tone for the day.”

Book, who started with three straight completions, capped the opening drive with a 4-yard touchdown run. He is the first quarterback in Notre Dame’s modern era to run for three touchdowns in one half. He added 143 yards on 12-of-19 passing before exiting with 2:21 left in the third quarter as freshman Drew Pyne took over.

“Ian was better today — he managed the things we wanted him to do,” Kelly said. “He led the team to the fast start we wanted. He was tuned in and had a great week of practice. I liked his calmness in the pocket.”

Freshman Chris Tyree scored from a yard out about five minutes after Book’s first TD. It never got better for the first-year coach Jeff Scott’s Bulls (1-1), who were a late add to Notre Dame’s schedule after the Irish joined the Atlantic Coast Conference for this off season in a pandemic.

“They’ve got a playoff-caliber team and they really dominated the game from the beginning to the end,” said Scott, a former co-offensive coordinator for Dabo Swinney at Clemson. “I felt like I was playing Clemson there for the majority of the day.”

Reserve C’Bo Flemister ran for a career-best 127 yards for Notre Dame as the Irish spread the touches around between starter Kyren Williams (62 yards on 10 carries) and Tyree (65 on eight). The Irish finished with 281 rushing yards and 429 total yards.

Jafar Armstrong added a 5-yard TD run to close out the scoring for the Irish.

Meanwhile, the Irish defense limited USF to 65 yards in the first half and 231 total while breaking in three new starters. A total of nine players missed the game with safety Kyle Hamilton’s ankle injury and wide receiver Ben Skowronek (hamstring) out with injuries. Notre Dame did not disclose the reasons the other eight did not play.

The Irish special teams got into the act in the third quarter with the help of a high snap over the head of USF punter Trent Schneider. When the Australian picked it up 36 yards behind the line of scrimmage, Osita Ekwonu blocked Schneider’s kick and freshman Jordan Botelho recovered the ball as it was going into the end zone for a 45-0 lead with 3:23 left in the third quarter.