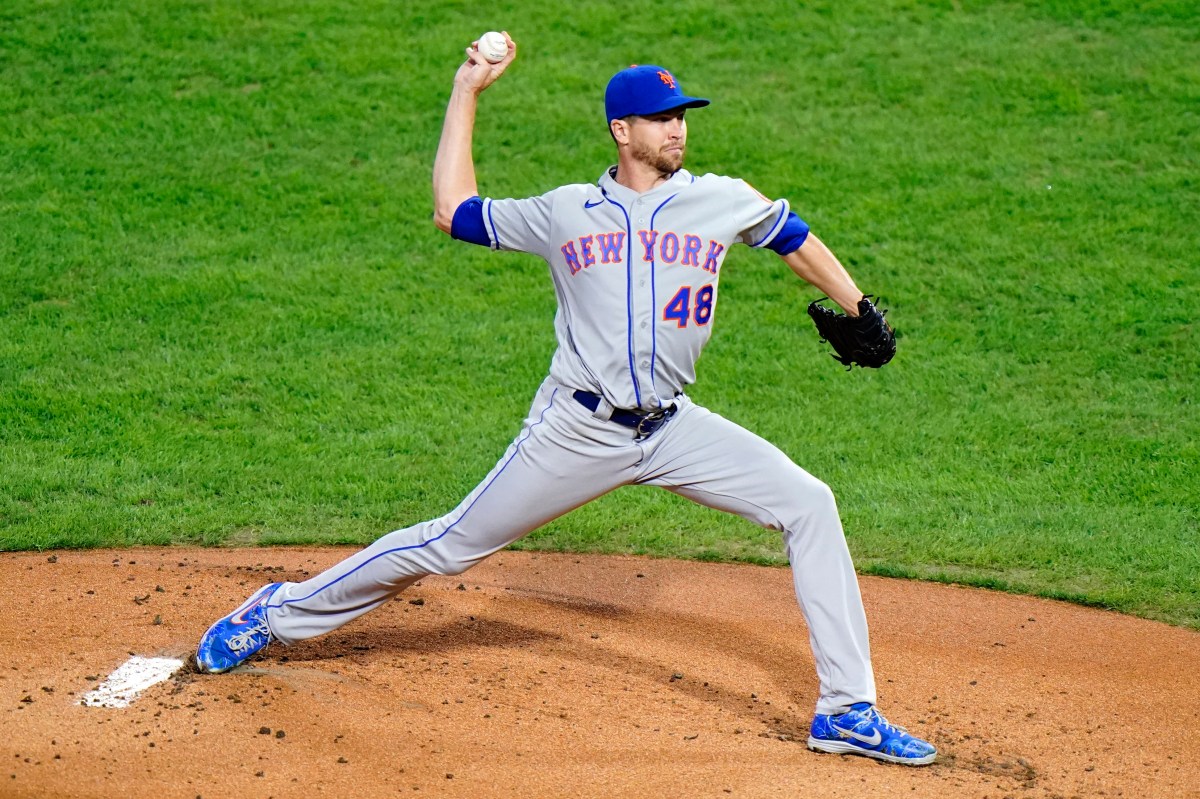 The biggest concern is keeping the Mets’ miniscule postseason chances alive, but Jacob deGrom will also have a National League Cy Young Award race to consider.

DeGrom will return to the mound Monday night against the Rays, after he was somewhat knocked around in his previous start, which concluded with him leaving the mound with a right hamstring spasm.

The Mets ace will enter play sixth in the NL with a 2.09 ERA. That number sat at 1.69 last week in Philadelphia before he allowed three earned runs over two innings and then departed with the hammy issue.

Corbin Burnes, Trevor Bauer and Yu Darvish are among the pitchers deGrom is chasing with two starts remaining. Bauer leads the NL with 88 strikeouts. DeGrom is sixth with 80.

After the Mets lost 7-0 to the Braves on Sunday, manager Luis Rojas was asked if deGrom’s pursuit of a third straight Cy Young Award will factor into any game decisions.

“The win is our focus,” Rojas said. “Jake has won back-to-back Cy Youngs because of the pitcher he is and we’re looking for that pitcher [Monday] that puts us in that spot to win the ballgame. That is how we’re going to make in-game decisions when Jake starts the game.”

Rojas said he considered calling for an intentional walk on Travis d’Arnaud in the eighth inning to load the bases. Jeurys Familia instead pitched to d’Arnaud, who delivered a two-run double that extended the Braves’ lead to 3-0. D’Arnaud finished the season 11-for-24 (.458) with three homers against his former team.

“It was something that crossed our minds,” Rojas said. “Maybe if there was a certain count later in the at-bat, probably, but we still thought Familia had the stuff to get Travis out as well. He made a good pitch and Travis was able to get to it.”

The Mets sent right-handed pitcher Stephen Villines to the Rangers as the player to be named later in the deal for pitcher Ariel Jurado on Aug. 5. Villines was selected by the Mets in the 10th round of the 2017 draft and was 10-7 with a 2.67 ERA over three seasons in the minor leagues.

In addition, the Mets sent infielder Victor Gonzalez to the Orioles, completing the Aug. 31 trade for reliever Miguel Castro. Gonzalez was a non-drafted free agent signed by the Mets last year.