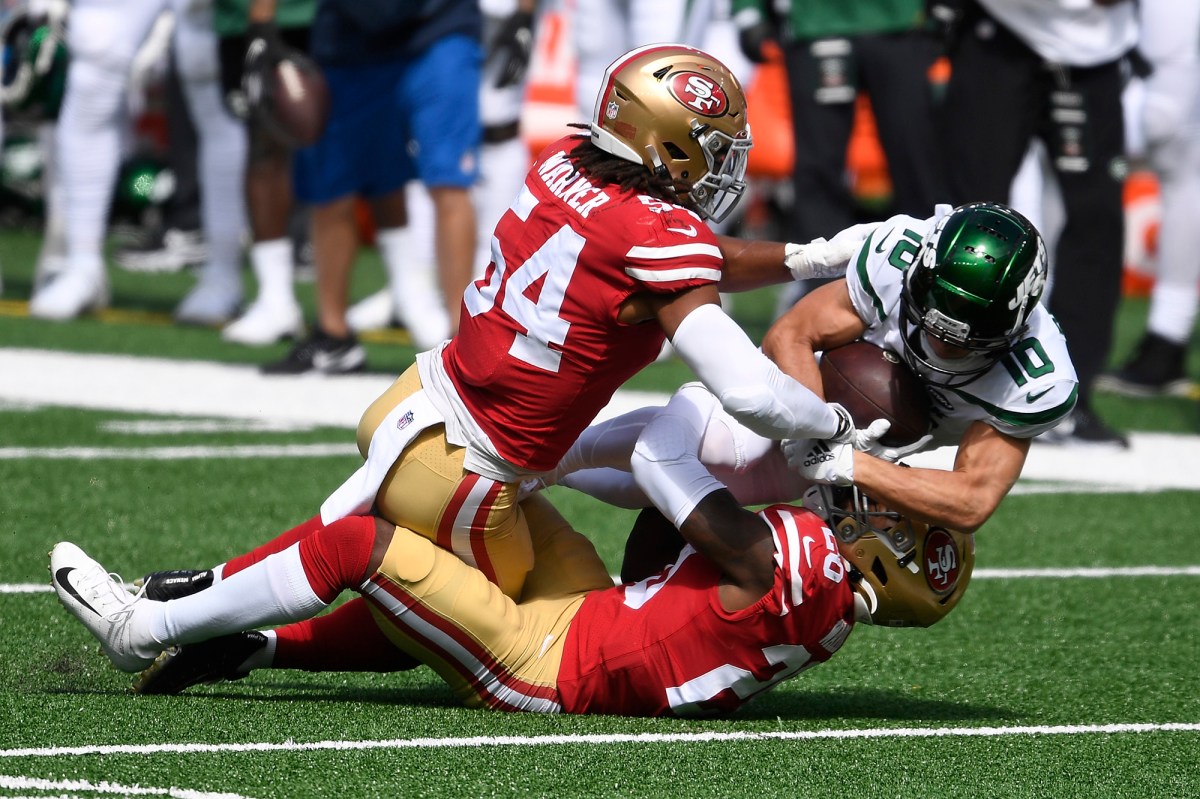 At this rate, Sam Darnold will have to start catching his own passes.

His already-thin wide receiver corps took yet another hit on Sunday, when his most established option, Breshad Perriman, suffered an ankle injury in the second quarter and didn’t return. It left Darnold with Chris Hogan, Braxton Berrios and Josh Malone, and predictably the offense failed to reach the end zone until the final minutes of an ugly 31-13 loss to the 49ers at MetLife Stadium on Sunday.

It’s too early to tell if Perriman will join Jamison Crowder (hamstring) and Denzel Mims (hamstrings) on the sideline — he will undergo further testing on Monday, coach Adam Gase said — but not having him on Sunday certainly didn’t help Darnold. While he was more accurate than he was last Sunday against the Bills, Darnold still didn’t move the offense nearly enough against a defense missing stars Dee Ford, Richard Sherman and Nick Bosa despite completing 21 of 32 passes for 179 yards and a touchdown.

“I think, for one, we’ve got to get healthy,” Darnold said, when asked about changes the Jets can make, which was hardly a vote of confidence for his current receivers.

It’s hard to blame him. Entering the game, Berrios and Malone had combined for 13 receptions for 190 yards in their careers and the more experienced Hogan made just eight catches a year ago with the Panthers.

Most of his completions were short, in-rhythm passes for meager gains. Hogan, who led the Jets with six catches for 75 yards, admitted the 49ers played more press coverage than usual, a sign they weren’t worried the Jets could beat them deep. Take away his 30-yard scoring strike to Berrios and 27-yard completion on the same drive to Hogan in garbage time, and Darnold’s 19 other completions averaged a paltry 6.4 yards.

Gase has said the Jets were hoping to avoid injured reserve for Crowder, while Mims will miss at least two more games. Perriman could be back next Sunday, though it’s uncertain at the moment. For the time being, the Jets will have to make do with Berrios, Malone and Hogan, three players that weren’t supposed to be relied upon in the passing game this year.

“It’s just another opportunity for someone to step up,” Hogan said. “So as a room, we just have to stay together, keep doing our job, get open, catch the football, make plays down the field and focus on that. The rest will take care of itself.”