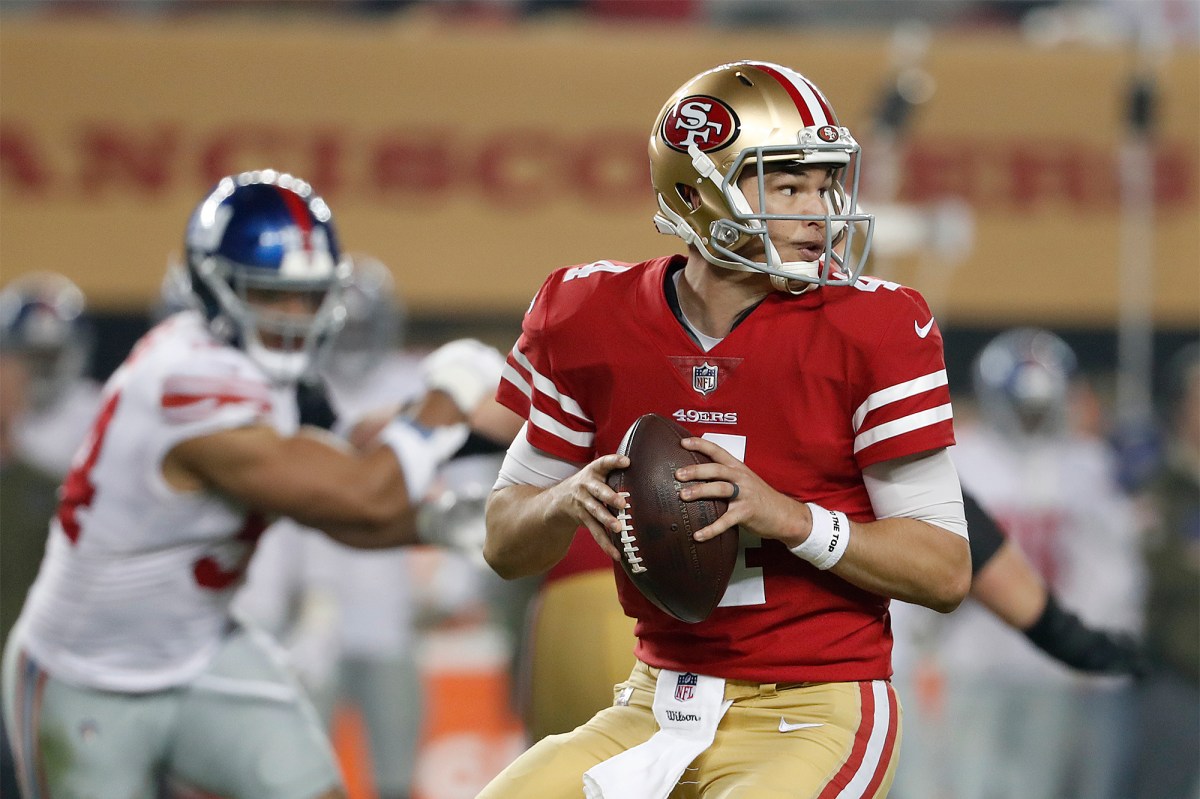 The Giants are likely to face backup Nick Mullens at quarterback for the 49ers in Sunday’s game at MetLife Stadium.

Starter Jimmy Garoppolo went down with a high ankle sprain in the Week 2 31-13 victory over the Jets. Mullens, his replacement, completed 8 of 11 passes for 71 yards and one interception.

“Most likely Nick Mullens,’’ said 49ers coach Kyle Shanahan, when asked who the Giants will see this weekend. “I mean, I’d be surprised if Jimmy is ready, I know he’s still trying to hold out hope. We’ll see there at the end of the week, but right now we’re going as if Nick is playing.’’

Mullens, 25, started against the Giants in 2018 on “Monday Night Football,’’ with the Giants winning 27-23. Mullens threw one touchdown and two interceptions in the game.

Rosas pleaded no contest to reckless driving, leaving the scene of an accident and driving without a valid license as a result of a June accident when witnesses said he drove through a red traffic signal at 90-100 mph and slammed into another vehicle in an intersection. A bloodied Rosas was later found walking about a mile from the scene, according to the police.

Rosas, 25, was ordered to pay fines and court fees, obey all laws and avoid alcohol if driving. He faced a maximum of 270 days in jail on those charges, but the judge imposed a “stayed” sentence of 30 days, according to Erpino. So, Rosas will avoid jail time unless he violates probation.

The Giants cut Rosas just before training camp in July. He is a free agent who could attract interest based on the potential shown as a Pro Bowler (32 of 33 on field-goal attempts) in 2018, before an inconsistent 2019 season. The NFL still could impose a penalty under its personal conduct policy regardless of the legal resolution.

Rosas was arrested, charged with a DUI and placed on 30 months of probation before signing with the Giants in 2017.

Representatives from the NFL and players’ union inspected the MetLife Stadium field Wednesday in the aftermath of the 49ers’ complaints.

The 49ers lost defensive linemen Nick Bosa and Solomon Thomas to torn ACLs Sunday on the MetLife field. They also lost running back Raheem Mostert to a knee injury, as well as Garoppolo. Some of the 49ers called the field spongy, and defensive lineman Arik Armstead called it “trash’’ on Twitter.

Clearly, Giants coach Joe Judge has had enough discussion about the turf at his home stadium. Asked what the league said to him about the playing surface at MetLife, Judge said, “I’ve had no conversations with the NFL on the field. I’ll let them take care of that. We’ve been fine with it.’’

Just two players are on this week’s Giants injury report: LB Carter Coughlin (hamstring) and DB Adrian Colbert (quad). Coughlin was a full participant in practice; Colbert was limited. … For the 49ers, are a mess. In addition to Garoppolo, RB Tevin Coleman (knee), DE Dee Ford (back) and Mostert (knee) did not practice. TE George Kittle (knee) was limited and C Javon Patterson was signed to the practice squad. He was a 2019 seventh-round draft pick of the Colts out of Mississippi and spent all of last season on injured reserve.