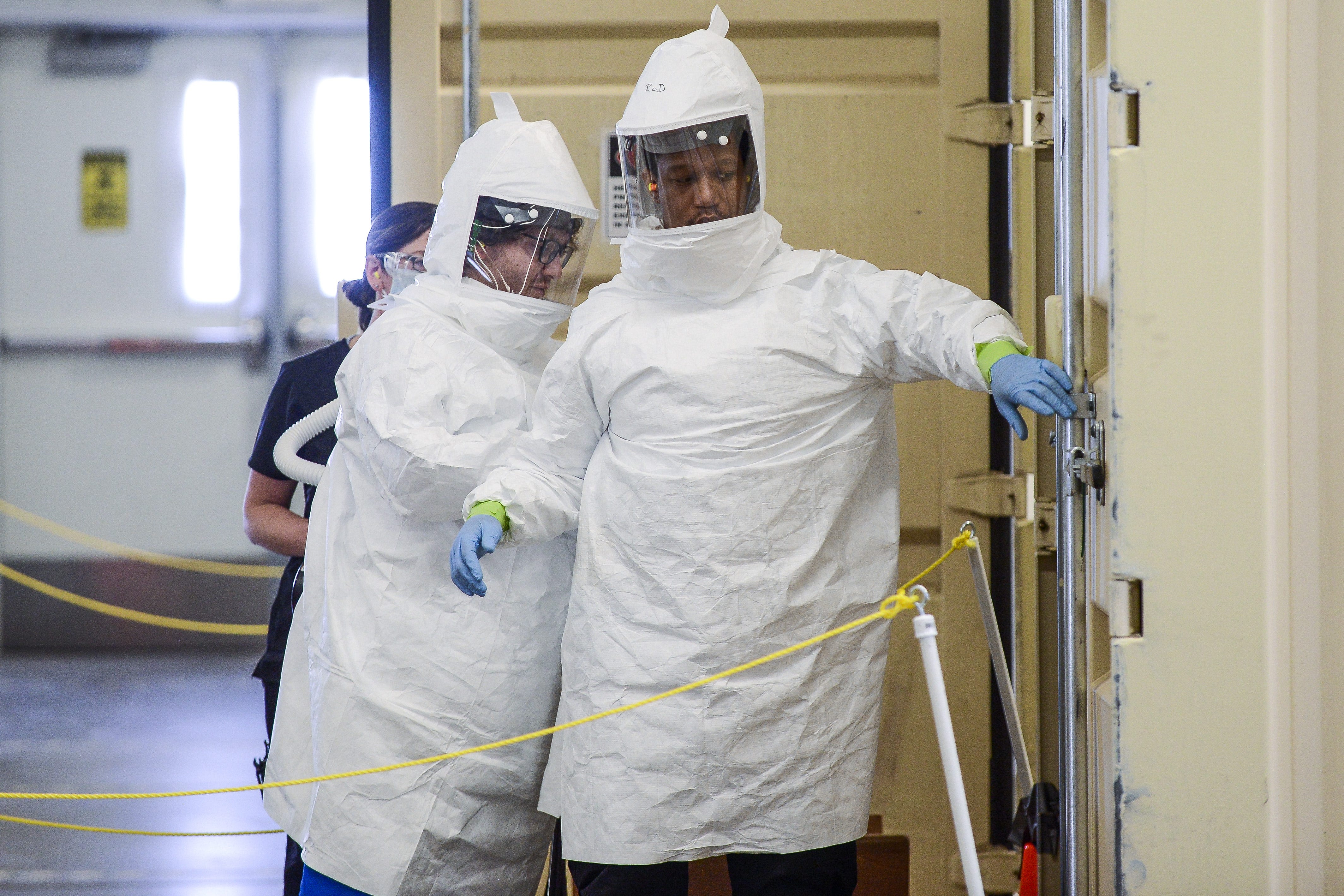 Americans without employment in the COVID-19 crisis are in limbo this weekend as Congressional leaders headed home without acting to extend a $600 per-week expanded jobless benefit that has helped keep both families and the economy afloat.

It’s the latest blow for the millions of jobless people who have been caught in a tug-of-war between Republicans and Democrats over how to proceed in the next phase of trying to get the sagging economy back on track.

And while health leaders remain optimistic that a vaccine may arrive by the end of the year, the nation’s death toll swelled to over 153,000 heading into Saturday. A weekly USA TODAY analysis of Johns Hopkins data shows six states set records for new cases while nine states had a record number of deaths.

Here are some significant developments:

📰 What we’re reading: What does a post-vaccine world look like for seniors? It’s time to learn telemed. Oh, and how you travel will change.

Our live blog is being updated throughout the day. Refresh for the latest news, and get updates in your inbox with The Daily Briefing.

Fauci confident virus vaccine will get to Americans in 2021

Dr. Anthony Fauci said Friday that he remains confident that a coronavirus vaccine will be ready by early next year, telling lawmakers that a quarter-million Americans already have volunteered to take part in clinical trials.

But if the future looks encouraging, public health alarms are still going off in the present. Officials testifying with Fauci at a contentious House hearing acknowledged that the U.S. remains unable to deliver all COVID-19 test results within two or three days, and they jointly pleaded with Americans to comply with basic precautions such as wearing masks, avoiding crowds, and washing their hands frequently.

Those simple steps can deliver “the same bang for the buck as if we just shut the entire economy down,” said a frustrated Dr. Robert Redfield, director of the Centers for Disease Control and Prevention, adding that he has studies to back that up.

Looking ahead, Fauci said he’s “cautiously optimistic that we will have a vaccine by the end of this year and as we go into 2021. I don’t think it’s dreaming … I believe it’s a reality (and) will be shown to be reality.” As the government’s top infectious disease expert, Fauci heads the National Institute of Allergy and Infectious Diseases.

Lena Dunham has been open about her battle with the chronic illness Ehlers-Danlos syndrome. Now she’s getting candid about her latest health struggle: COVID-19.

The “Girls” alum, 34, revealed Friday that she was diagnosed with COVID-19 in mid-March. Although she was “reluctant” to go public with her diagnosis, Dunham hopes detailing her “intense” experience with the virus will curb other’s “carelessness.”

Dunham said she was in self-isolation by herself for 21 days fighting COVID-19, after initially confusing the virus’ symptoms with her chronic illness. Dunham described a plethora of side effects, including loss of “sense of taste and smell,” sensitivity to sound, numb hands, inflammation of nerves, a “hacking cough,” difficulty breathing, a “pounding headache” and random red rashes.

“It felt like I was a complex machine that has been unplugged and then my wires rerouted into the wrong inputs,” she said. In isolation, “I couldn’t believe how intense the loneliness had been, in addition to illness.”

Coin shortage in US has banks begging for spare change

The COVID-19 change shortage has bankers across the country asking customers to bring in rolled coins as a way to pump more pennies, nickels, dimes and quarters into circulation. A Wisconsin bank this summer went so far as to offer an extra $5 for every $100 in coins that are brought in. The deal turned out to be incredibly popular and lasted but seven days.

It’s quite a switch from a time when many banks didn’t want your spare change. In the past few years, many big banks phased out services that would count your coins. Some, like charge a 10% fee to count change for non-customers. Other banks charge both customers and non-customers.

But a lot has changed during the pandemic. Since mid-March, huge chunks of the U.S. economy have shut down in an effort to reduce the spread of the coronavirus.  Laundromats, coffee shops, bank branches and other spots where coins regularly changed hands have either closed their doors or significantly trimmed operations.

At the same time, the “U.S. Mint’s production of coin also decreased due to measures put in place to protect its employees,” according to the Federal Reserve. Production has been ramped up.

More than two weeks after the Trump administration ordered a sudden shift in the reporting process for hospitalized COVID-19 patients, states continue to have trouble adjusting. Missouri didn’t have hospitalization data available on its COVID-19 website from July 15 to July 24, at a time when daily new case counts were nearly doubling.

“Having that local data disappear during that critical period didn’t allow us to react to what was going on in our communities,” said Dave Dillon, vice president of public and media relations for the Missouri Hospital Association.

On July 15, hospitals became required to send all patient information directly to the U.S. Department of Health and Human Services instead of the Centers for Disease Control and Prevention, which had been doing it since the pandemic’s start. The switch, which drew condemnation from many public health professionals, was supposed to provide more complete data and faster reporting. But states have run into technological and operational problems.

HHS still hasn’t spelled out key definitions, said Dillon, such as whether hospitals should count patients awaiting test results or only those confirmed to have COVID-19.

California, Texas and South Carolina have all issued warnings about the accuracy of their data, according to the COVID Tracking Project, a volunteer organization launched from The Atlantic. A look at COVID Tracking’s data shows anomalies for hospitalization counts in Texas, California and Wisconsin as well as Missouri – consecutive days with no updates, or else sudden drops or spikes. COVID Tracking says it now considers state and federal hospitalization data, which it called “one of the best measurements of the size and severity of outbreaks across the United States,” unreliable.

Florida sheriffs meet with Trump after conference with virus-infected colleague

Florida sheriffs who had attended a conference this week with a COVID-19-infected colleague met Friday afternoon with President Donald Trump.

Lee County Sheriff Carmine Marceno, who hosted the conference and whose agency polices Bonita Springs, stood behind Trump along with 14 other sheriffs as Trump praised them and announced he had received “dozens” of their endorsements. Neither Trump nor the sheriffs wore masks. Two of the sheriffs said they had been rapid-tested for COVID-19 before meeting with Trump.

After winding down operations at the end of May, a temporary hospital at one of the nation’s largest convention centers will reopen and begin receiving COVID-19 patients next week, Georgia Gov. Brian Kemp announced Friday.

The Georgia World Congress Center will reopen with a total capacity of 120 beds and will house an initial surge of 60 beds.

“These additional hospital beds will provide relief to surrounding healthcare facilities while providing top notch care for patients,” Kemp said in a statement.

More than 3,700 people have died and more than 186,000 people have tested positive for the virus in Georgia, which was the first state to begin reopening businesses at the end of April

Study: Colleges could reopen safely if they screen students every 2 days

It could be safe for students to return to campus this fall if colleges conduct rapid coronavirus screening every two days, according to a study published Friday in the Journal of the American Medical Association by researchers at Yale, Harvard and  Massachusetts General Hospital.

The researchers created a computer model to simulate a medium-sized college with about 5,000 students – all younger than 30 years, nonimmune and living in a congregate setting – and initially assumed that there were 10 undetected, asymptomatic cases of COVID-19 on campus.

The model found that by screening every two days with a rapid and inexpensive test – even if not always accurate – coupled with “strict behavioral interventions,” a college could maintain a “controllable number” of infections at a cost of $470 per student per semester.

The United States announced Friday it will pay French pharmaceutical company Sanofi and Great Britain’s GlaxoSmithKline up to $2.1 billion to test and produce 100 million doses of an experimental coronavirus vaccine.

More than half of the money will support further development and early-stage clinical trials to ensure it is safe and effective. The rest will pay for the first 100 million doses, with an option on 500 million more. The majority of the $2.1 billion will go to Sanofi, which made the vaccine candidate. GlaxoSmithKline made a booster that improves how the body responds to it.

The deal is part of Operation Warp Speed, a White House-led initiative aimed at getting a vaccine to stop SARS-CoV-2, the virus that causes COVID-19. The Trump administration initiative has now spent more than $8 billion on experimental vaccines that may or may not make it across the finish line.

Virus takes its toll on Muslim holiday, with curbs on travel, large gatherings

The coronavirus pandemic is forcing Muslim families worldwide to readjust their celebrations this week for Eid al-Adha, the second of two major Muslim holidays, as families scale back travel and adhere to face social distancing guidelines.

Eid al-Adha,  which marks the end of the hajj, or pilgrimage, season, is a three-day celebration in Muslim-majority countries. In the United States, most observe just one day.

This year Saudi Arabia suspended travel to Mecca for the annual hajj. Worldwide, many gatherings will take place online this year, unlike big celebrations such as a gathering of 30,000 people in a football stadium in Minnesota.

On Facebook: There’s still a lot unknown about the coronavirus. But what we do know, we’re sharing with you. Join our Facebook group, “Coronavirus Watch,” to receive daily updates in your feed and chat with others in the community about COVID-19.

In your inbox: Stay up-to-date with the latest news on the coronavirus pandemic from the USA TODAY Network. Sign up for the daily Coronavirus Watch newsletter here.

Tips for coping: Every Saturday and Tuesday we’ll be in your inbox, offering you a virtual hug and a little bit of solace in these difficult times. Sign up for Staying Apart, Together here.